I took the family camping at Borumba Deer Park on the weekend. Following are a few comments on our experience, and some photos of the park and local attractions.

Once we had checked in, we had little to do with the staff. The few times we did encounter them, they were generally pleasant and easy to deal with, except our situation on arrival – see below.

I do not know what was going on, but the fellow allocating camp sites on our arrival was determined to put us next to some single male in a beat up caravan with beer cans in a pile outside. We asked whether several different camp sites were available. With some pushing, we finally agreed to the ‘Nottingham’ camp site. Despite it being the start of school holidays, none of the sites we requested were filled over the weekend so I am not sure what the guy’s problem was. Why couldn’t we camp where we wanted to? 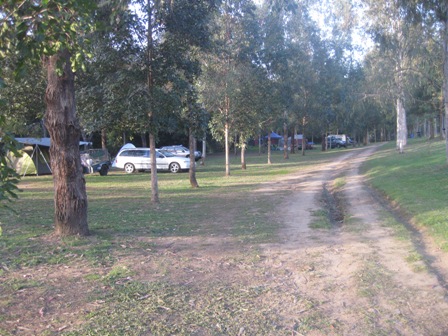 Borumba Deer Park was not busy, despite it being the June school holidays

The toilets and showers at Borumba Deer Park were kept very clean – there was a cleaner in there nearly every time we went in. Mind you, when there was any moisture on the ground outside, the toilets got dirt trampled through them every time someone came in. There was a mop left in there and people were encouraged to mop up after themselves. A few people didn’t, but the cleaners took care of that pretty quickly.

If you are camping at the far end of the camp ground (where we were), be aware that it is a fair hike to the toilets. It might be worthwhile bringing your own portable toilet for overnight toilet stops, particularly if you have young kids. There is a dump point for chemical waste behind the amenities block. There is a separate amenities block for the Sherwood Forest camping area.

Generally the Borumba Deer Park camp sites are large – our 20′ x 24′ tarp fitted on the site. The unpowered sites are the pick though with their bush surrounding – even better if you can get one down near Yabba Creek. The powered caravan sites seem too much like a standard van park for my liking. Watch out for sites with hollows in them, such as “Wood Pile”. They could make camping very damp if it rained. 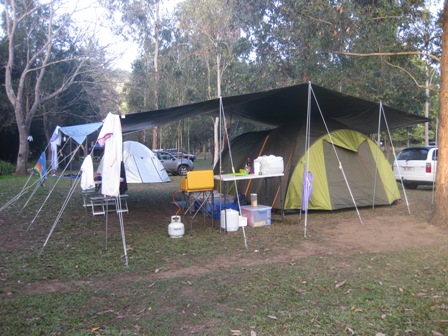 Our campsite at the Borumba Deer Park

We had no problems with sandflies, midges or flies, but we were camping in the middle of winter.

The deer are a little over rated. Of the four days we were there, there was only one organised deer feeding. However, you can feed them bread any time you like. And I never did get to taste one of the critters. The deer are a draw card that are being under utilised in my opinion. 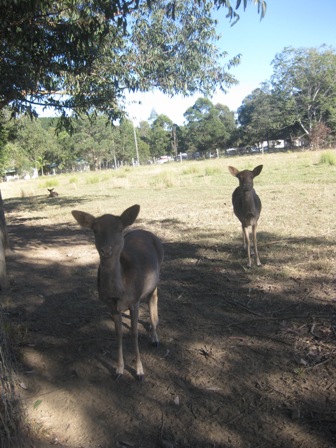 A couple of the deer at the Borumba Deer Park

The creek was very cold in June, and not many people ventured in for a swim. I imagine it would be quite popular in the warmer months.

The playground was very much 70s style and the roundabout did not work. They were in the process of installing some new play equipment, but we could not quite work out what it was going to be.

There was a shared camp kitchen, but we did not use it. Our neighbouring campers did, and seemed to like it.

I loved having a camp fire at every site. Some people had huge mounds of wood, but we kept our fire fairly small.

The Imbil area has some tourist potential, but is underwhelming. The Imbil markets were tiny by Brisbane standards, but I guess that is to be expected of a country market. The were a couple more stalls to the left of the photo. When the Gympie-Imbil steam train arrives, a few more people filled the markets, but it was hardly a mad rush. 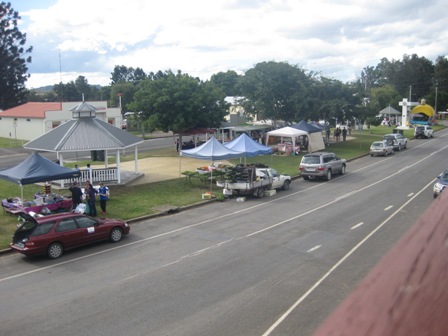 The Imbil country markets were tiny by Brisbane standards

The most noteworthy thing is the steam train which turns around at Imbil. It only runs a couple of days a week (at the time Wednesday and Sunday), so make sure that you time your trip with a train visit. 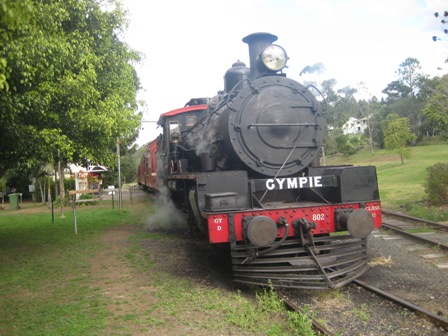 Gympie Cooloola Tourism has more information on the area.

We toured a few of the other local camping grounds, and the Borumba Deer Park was certainly the most popular.

Borumba Deer Park is a nice bush camping experience, but the deer as an attraction are somewhat underutilised. Great for a quiet weekend, but do not expect a lot of tourist attractions.