I purchased a BlackWolf Turbo Plus 300 today from Down Under Camping at the Caravanning Queensland 2010 Pre-Christmas Caravan & Camping Sale. 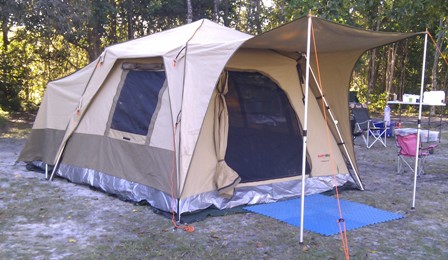 On our last camping trip I performed the tent set-up in a stiff 20-knot breeze coming straight down the Noosa River to our camp site at the Noosa River Caravan Park. Erecting our 10-person Jackaroo dome tent proved to be a problem in the wind. I had to erect a wind break out of disposable cheap blue tarpaulins before I spent about an hour erecting the tent. Even in good weather, the tent takes a good 45 minutes to erect. After a lot of cursing, my wife was finally convinced that buying a BlackWolf tent was a good idea.

We went to the camping show with the intent of purchasing a BlackWolf tent, but as we walked in to the show the decision became quite difficult because the OzTent Jet Tent and OZtrail Blitz were also on display at the Tent World stand.

We quickly ruled out the OZtrail Blitz – to us, the quality just wasn’t there. If I am going to spend $800+, I want quality and I will spend an extra couple of hundred dollars to get what I want.

The Jet Tent was a different scenario. The folks at OzTent have been making their quality RV series of 30-second tents for years. Their product has an excellent reputation and loyal followers. Apparently the Jet Tent was developed in response to customer concerns about standing headroom and the overall size of the RV tent series. I think that the initial market for the Jet Tent will be loyal followers as they upsize from their OzTent as their families grow.

The Jet Tent is a good looking piece of serious camping kit. I am sure that the tent will be the centre of attention every time it is erected at a camping ground! If the tent had more online history, I would be very tempted to get an F30 for when my wife and I go camping without the kids.

The Jet Tent Queensland representative seemed a straight shooter who was happy to recommend his product without stooping to bagging the opposition. He pointed out that the main differences of his tent were:

Our evaluation eventually came down to:

Apparently the three sections on each leg of the Jet Tent are linked by an internal wire – that is how they get the whole lot to collapse at once. But if one part of the mechanism were to be damaged, or the internal wire stretched over time, the whole leg could potentially become inoperable. At least with the BlackWolf tent, the knuckles are separate – if one was broken then a stick and some gaffer tape could jury rig it to see you through the camping trip. Would that also be possible with the Jet Tent?

When someone asked the Jet Tent Queensland Manager what would happen if one of the legs was damaged, he said he would freight a whole new leg to you. That is not much use if you are on a month long trek to the outback. Basically, damage to one tent leg would render the tent useless and wreck your trip.

I know that the BlackWolf tent designs are aging a little, while the Jet Tent is the latest and greatest design responding to customer feedback. A quick Google search will find that the BlackWolf tents did have problems when they were launched, but the company has stood by their product and resolved any issues. The ripstop polyester BlackWolf tents have also experienced more problems than the canvas versions. I decided to play it safe and go with the old technology and not to be an early adopter of the Jet Tent, which may still have unknown problems of a new product. In a couple of years I may spend my hard earned money on a  Jet Tent when there is some online history about them. In the meantime, I will probably buy another smaller BlackWolf tent for my wife and I to camp in (without kids). This will probably last me 10 years, so will never get around to purchasing a Jet Tent.

We met a couple of people at the show comparing the same tents as us. They also decided on the BlackWolf Turbo Plus 300 (the canvas version), so together we bargained and got a super deal from Down Under Camping for $1130 each.

Incidentally, the standard show special was $1499 for the Jet Tent 30X, while the BlackWolf Turbo Plus 300 was being sold at $1179. However, the difference in price was not a deal breaker for either of us. As I said before, if I am spending that much money, a couple of hundred dollars either way does not make much difference if I am getting the product that I want.

On getting the tent home, it took me about 15 minutes to set it up. That included picking up some dog poo off the lawn from the neighbour’s dog, and putting the fly on the tent. I think that 10 minutes will be a fairly standard set-up time.

The quality of the BlackWolf tent was excellent. Of note was that this tent actually includes quality tent pegs.

Be aware that this is a seriously heavy tent at 30 kg. The tent will not fit across the back of my Prado, so the only place for it is the roof. Think carefully whether you are capable of lifting that sort of weight and bulk onto the roof of your vehicle. I hate to think how heavy it will be when we have to do a wet pack!

I am looking forward to our first camping trip with our new tent!!