Sometimes less is more when camping. This simple shade shelter is easy to erect, took up little room when packed in the car, and is stable in moderate wind. The best part is, the shade shelter cost me nothing as I made it from gear already in my camping kit.

Like many other campers, I have a gazebo and other shade structures in my camping kit.

I only have a limited space in the boot and roof of my Toyota Prado, so taking my OZtrail gazebo camping is not really an option. The gazebo is too long to fit in the boot of my car, but too heavy to be put on my roof rack along with my tent and other camping gear stored up there.

I also have a Coleman Event 12 shade shelter purchased specifically because the Event 12 fits in my boot, but the Coleman Event 14 is too long and does not (except if I lay it diagonally across the cargo space, which consumes too much space). I have never actually pulled the Coleman Event 12 out of its bag or erected it, even though I have taken it on a camping trip!

I also have a Darche Outdoor Gear camp shelter in my camping kit. While it is super compact, I have never actually used it on a camping trip because it is so large and light that it tends to be easily wind affected. Unless I am camping in totally calm conditions, it really is not very useful.

The Darche Outdoor Gear camp shelter set up gave me an idea. What if I used some gear that I had lying around to erect a similar structure using a tarp. The gear took up so little space that they were no problem to pack so I took them along on my last camping trip to Adder Rock Holiday Park on Stradbroke Island. The poles, tarp, ropes and pegs have a multitude of uses, so they were never going to go astray on a camping trip either. 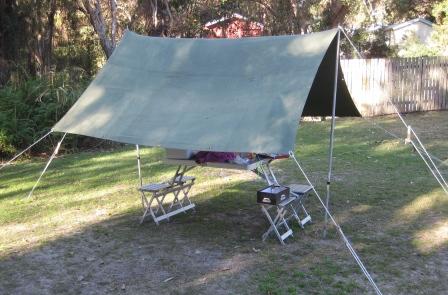 What you will need for this setup are:

To erect the shelter, first lay the tarp flat on the ground. Next, lay out the guy ropes and hammer the tent pegs into the ground — one guy rope for each pole, and one for each corner of the tarp. Raise one pole and angle it so that it stands loosely on its own. Then raise the other pole and tension all the guy ropes so that the tarp makes a stable shelter.

As it turns out, the tarp made a very effective and simple shade shelter for our Coleman camping table. It took me (with no assistance) about five minutes to set up, and even less to pull down. The shelter was stable in a moderate breeze. I placed our chairs underneath the tarp shelter at night to keep the dew off them. 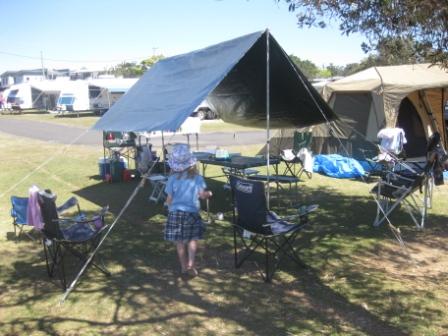 The beauty of this set up is in its simplicity. It is easy to erect, takes little space packed in your camping gear, and the gear has a multitude of different uses around the camp site.