I spotted this bumper sticker on the back of a car yesterday: “Is that the truth? Or was your News Limited?” 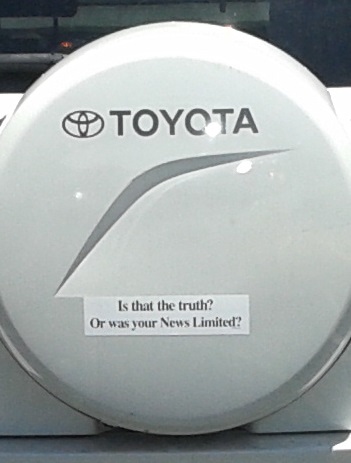 Bumper sticker: Is that the truth? Or was your News Limited?

I thought this was an interesting statement on News Limited (News Corporation) publications, including The Courier-Mail which has a print media near monopoly in the Brisbane market place.

Before the 2013 Federal Election, it was widely reported that News Limited publications were heavily biased towards the Coalition. Was your news being limited?

News Limited publications also continually beat up stories about cars versus cyclists. Struggling for news? “That’s alright, we’ll roll out another cars vs bikes story.” The News Limited stable of publications regularly stirs up a hornets nest with sensationalist headlines and articles. The trouble is, stirring up road rage in car drivers can be lethal for vulnerable cyclists.

Get with the times News Limited — modern cities around the world are actively promoting cycling for its transportation and health benefits. Why do your publications continually report cycling in a negative manner? I feel so strongly about this that I actively boycott all publications from News Limited.

My main source of news these days is the Brisbane Times from the Fairfax stable of publications. With writers like Michael O’Reilly on staff and a cycling sports section, the Fairfax publications promote a far more positive image of cycling, and at worst provide a balanced viewpoint.