The wind was blowing, the sun was shining, and I took the opportunity to take my two biggest parafoil traction kites down to my local park for a back-to-back comparison. My wind gauge was indicating 5 knots to 10 knots, gusting to 15 knots. The two kites on test were a PKD Buster II 2m and a Prism Stylus P3. 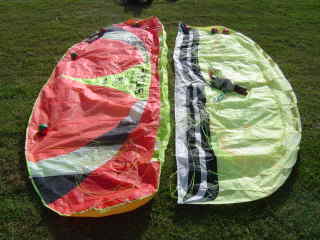 The Buster II with its four lines is more complicated to set up and more prone to line tangles. The P3 was easy to set the lines up right. However, the Buster II’s four lines came into their own once in flight. Being able to control the power was a big plus. But the best part was being able to reverse launch as well as the general ability to re-launch after a crash. It saved many walks of shame …

While the P3 has the ability to fit brake lines, having now experienced the Buster II I would not bother. Firstly, the pull on the P3 was not sufficient to warrant fitting brake lines. Secondly, by the time you spend the time and money fitting the extra set of lines, you may as well have bought a kite already fitted with four lines and spent the time in the park flying! The only time that the P3 might overpower you is in really big winds. But at that stage, the Buster II would have dragged you across the park and out of sight!

The P3 is generally easier to launch if set up on the ground with the trailing edge weighed down and facing the wind. Take up the tension on the lines, and with air intakes all the way across the front of the kite it inflates easily, then launches. While the Buster II is not hard to launch, it is interesting to watch the process. With fewer air intakes on the leading edge, it can take longer to inflate. The kite can launch on wind pressure against the front skin of the kite alone. Half way up to the zenith, you can see the kite inflate and the power kicks in — and so does the grin factor!

The Buster II feels slower through the air than the Stylus P3. However, despite being a smaller kite, the Buster II has a lot more pull. While the P3 was maybe pulling me five centimetres on my backside in gusts, the Buster II would pull me 15 to 20 metres. In fact, the rate of motion was enough that I was getting some serious heat build up on my backside from the friction!

The Prism P3 gets a wonderful high pitched scream as the wind whistles through the lines and the kite dashes across the sky. The Buster II is comparatively quiet by comparison.

I would rate the Prism Stylus P3 as a great recreational kite. It has higher speed, but less pull than the Buster II. However, if you are serious about getting into traction kiting, then the Buster II is definitely the way to go — in fact, I have got a mountain board on order to give a bit of traction kiting a go with the Buster II. Once I get the hang of it, I would like to get a four metre Buster II.