My wife’s mother rented us a place at the Gold Coast for the Labour Day long weekend. I turned up down there and the place was right on the beach! Problem was, I had left my quiver of kites at home. Bugger. 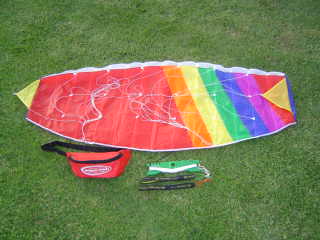 First opportunity I scooted over to the local kite shop, Kamikaze Kites. Friendly folks they were. I was impressed at their range of kites overall. I already have several traditional stunt kites so wanted a parafoil. However, despite their range of other kites, they only had a couple of dual line foil kites. I wasn’t keen to spend more than $100, so settled on the Premier Kites Speed Foil Rainbow Red #64502. I understand from reading the web since that the kite is no longer made.

I got it back to the unit and took it down to the beach at the first opportunity — about 10-12 knots of wind. I set up the kite and launched it. Yee hah!! Straight to the top of the wind window where it sat nicely. I then began to play with it, after a while spearing across the power window. It is not called a speed foil for nothing!!

On review, the kite pulls quite nicely for its size, but it is still a small kite and is never going to drag you down the beach. Mind you, in the right breeze it has the potential to make you lean to counter-balance it.

With no spars to break, I was okay to let my wife crash it — sorry, I mean fly it! My three-year old daughter even had a go, randomly pulling on the lines until it crashed. My wife had to hold her down though because she was a little light!

The only draw back to the kite was that it was not easy to re-launch without going up to the kite and re-setting it in the sand. I understand a lot of other foils can be easily re-launched without having to trudge through the sand, re-set the kite, then trudge back again.

Still, I have had a ball with the kite so far.