My DMH Outdoors 4WD self-inflating mattresses have had a hard life. One of the four mattresses that I purchased now has a puncture in it and needed to be repaired.

We have both the DMH Outdoors Off-Road (10 cm) and Bush-Mate (8 cm) 4WD self-inflating mattresses. They have been used on numerous camping trips, but also were used for a couple of months as our primary beds after we were flooded in the Queensland 2011 floods.

Most self-inflating mattresses come with a repair kit. The DMH Outdoors mattresses contained instructions, a tube of solvent and a repair patch. 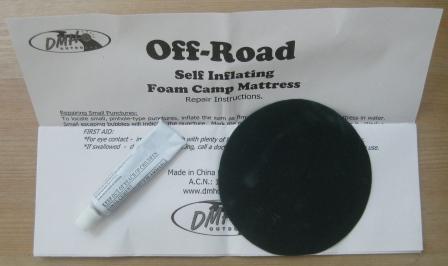 If the puncture is large, it should be easy to find. In my case, the puncture was small. I filled a bath with water and then immersed the self-inflating mattress in the water section by section. Each time, I would squeeze the mattress to force air out of the holes. Eventually I found the holes by the steady stream of bubbles coming out of them. It looks like these holes are the result of being pinched by something — probably from me being careless, rather than the fault of the mattress.

Note that the instructions will differ depending on the solvent and patch that has been supplied with your self-inflating mattress.

For pinholes, work a drop of adhesive into the puncture. Allow to cure for more than 30 minutes.

If the hole is large, trim the patch so that it is about 2 cm larger than the hole in every direction. Use the solvent as you would contact cement. Apply around about 2 cm beyond the damaged area and allow to get touch dry (about three minutes). Apply the trimmed patch and press gently to remove any wrinkles or bubbles. Allow the patch to cure for more than 20 minutes.

The four holes in my self-inflating mattress were tiny and in the corner of the seam. Following the instructions, I spread some of the solvent over the holes and tried to work it in to the hole by kneading the material backwards and forwards. If you squeeze some air out of the mattress, close the valves and then apply some adhesive, the mattress should suck some adhesive back into the hole. The solvent was thick like gel on application, but dried so that it was nearly invisible. It seems as if my repair has been successful, but time will tell.

We have had a good amount of use out of these DMH Outdoors 4WD self-inflating mattresses, so I think I have got my money’s worth already.

2 thoughts on “How to repair a 4WD self-inflating mattress”