We recently camped at Dicky Beach Holiday Park on the Sunshine Coast. The holiday park had a full size tennis court, children’s playground, modern amenities blocks and well set up camp kitchens. The park was adjacent shops and Dicky Beach.

I booked a camp site only three days before arriving, and in the last week of school holidays. Dicky Beach Holiday Park was the only park with a camp site vacancy that I could find on the Sunshine Coast. I think that is more a reflection of the holiday park’s large size being able to accommodate many people, as opposed to the popularity of the holiday park. We certainly enjoyed our stay there.

Dicky Beach Holiday Park has a handful of caravan sites near the beach, but I imagine in peak times you would have a lot of passing traffic.

Dicky Beach at sunset, with the remains of the SS Dicky shipwreck in the background

Walking path through Dicky Beach Holiday Park to the beach

Dicky Beach Holiday Park is adjacent a strip of shops that include an IGA, three fish and chips shops, a cafe/restaurant, a chemist, bottle shop, Indian restaurant, and around the corner was a Japanese restaurant.

More photos of Dicky Beach and the local area can be found here.

Camp sites were a generous size and well marked at the front, but I never did quite work out the line where the back of my camp site ended and our neighbour’s began.

The camp sites we were on near the tennis court were pleasantly shady. Trees had obviously been planted strategically many years ago. The trees were of sufficient size to allow you to pitch a tent underneath, but no so tall as to be a hazard should a branch break off the tree. Other holiday park managers take note.

The caravan sites and sites on the northern side of Dicky Beach Holiday Park were less shady.

One small gripe, I always like three, but preferably four hooks in the shower cubicles, as well as a bench. The cubicles at Dicky Beach Holiday Park only had one hook and a bench — a couple of cubicles were missing hooks altogether. I like one hook for clean clothes, one for dirty clothes, one for my towel, and one for hanging up anything else that you did not want to get wet, such as a toiletry bag.

This amenities block looked old, but had been recently renovated inside 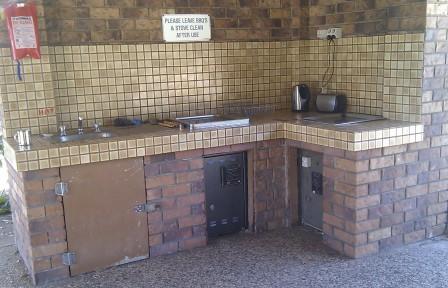 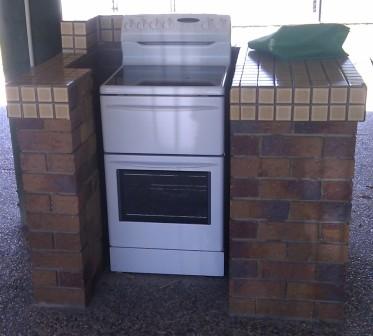 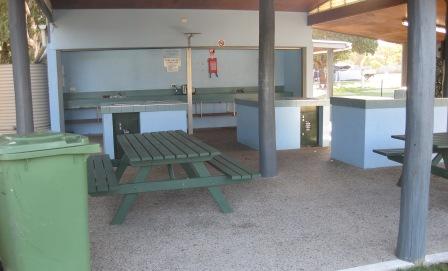 Camp kitchen on the northern side of the holiday park

There was a modern kids playground, a swimming pool, as well as a games/TV room. The full size tennis court was used constantly throughout the day. Even though we were camping near the tennis court, it did not annoy us. 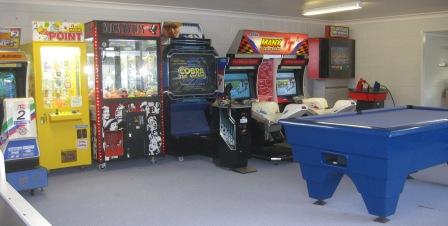 Dicky Beach Holiday Park is a great spot to stay. Be aware that it can get very busy in school holidays, but that is just a sign of what a popular holiday spot it is. The only thing really lacking was a couple of nice restaurants in the strip of shops adjacent the holiday park.