No matter how many times you tell children to walk around the guy ropes on a tent, sooner or later they will trip over them — usually at night. An inexpensive and easy solution is to place children’s bracelet glow sticks around the end of each guy rope at dusk.

During the day, most children will see guy ropes and walk around them. Unfortunately, at night, the guy ropes disappear into the darkness and most kids just forget that they are there. They charge through the night without pausing to think what they are about to run into. My BlackWolf Turbo Plus 300 tent has high viability orange guy ropes. Even that does not seem to help.

We had a situation where our child tripped over a guy rope at night and fell so heavily we were concerned that she had sprained her wrist — now that is one way to spoil a camping trip.

We have also had people walking by our tent at night stumble over our guy ropes, waking us up with a start!

After numerous trips over the tent guy ropes, I purchased a pack of Supa-Peg glow in the dark rope markers that I put on the tent guy ropes. At home, they seemed to work well. After shining a light on them, my kids would hide in a cupboard and be in wonder at the eerie green glow. However, even after a full day of bright sunshine at the camping ground, the glow in the dark rope markers had faded even before my kids had gone to bed.

I then found an inexpensive solution — children’s bracelet glow sticks. Every evening around dusk, I put a fresh set of glow in the dark bracelets around the rope and peg. Amazingly, they would still be glowing at dawn the following morning. 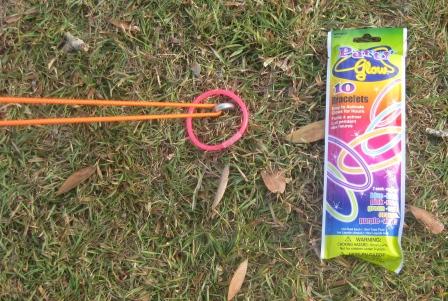 While my kids have now learnt the hard way to avoid the guy ropes at night, we went camping with some friends recently who had not camped with their children before. None of them — adults or children — tripped over a tent guy rope during our three night stay. Solution found, I say!