I run a small LAN at home, connecting two computers, a networked printer, VOIP phone and network music player. The LAN was running intermittently incredibly slowly, with the major symptom being problems with my new HP Officejet Pro L7580 printer which was plugged in to my DLink DI-704UP router via an ethernet cable. I was blaming the printer for the problems as it was sometimes working and sometimes not over the course of a week.

Two days ago, the network problems escalated, with limited connectivity to anything else on myÂ network, including the Internet. It was then that I diagnosed a router problem. After resetting the DLink DI-704UP to the factory presets failed to resolve the issues, I pulled out the router and plugged in a spare DLink DI-624 router that I had lying around. Bingo, the network became live again. It seems that my DLink DI-704UP router had died.

I have replaced it with a NETGEAR FVS318 router, with an 8-port switch and VPN firewall. I purchased it for $159 from the Computer Alliance in Brisbane. The router turned up on a courier today. I have just plugged it in following the NETGEAR simple instructions and my LAN is working properly again! 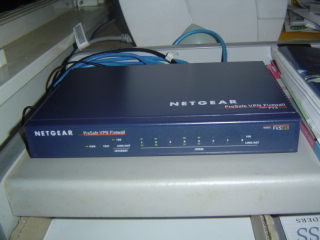 After plugging everything in, I visited ShieldsUP!, an internet security testing service by Gibson Research Corporation. The best thing was that the NETGEAR FVS318 router was operating in total stealth mode straight out of the box . I always had to tweak the DLink routers to get them to operate in total stealth mode.

First impression is that I like the NETGEAR router. A nice black industrial-looking box. Business strength features. Plugs in easily. And a good level of security straight out of the box. Nice.

One thought on “Dead router replaced with NETGEAR FVS318”