I am a middle aged man in lycra – a MAMIL. I raced road bicycles in my school teenage years. I also rode a few laps around the Silverdome (Launceston’s velodrome) in the mid-80s. Apart from that, I have never ridden on the track. It was time to step up to the velodrome.

A few years ago I looked down and decided that my middle-aged spread had to go. I tried running, but it hurt too much. So after 20 years of not owning a bike, let alone riding one, I started riding again. A year later, and 16 kg lighter, I felt I had achieved my goal. I had a reasonable level of fitness – at least compared to the average person on the street — and had lost much of my excess flab. I started to look around for opportunities to use my healthier body.

Spending long hours in the saddle mixing with angry traffic while training for road races did not appeal to me, and was not family or work friendly. Criteriums? Maybe. Triathlons? I hate swimming and running hurts too much. What else was left?

It was only when Repsych Cycling Development promoted a ‘try the track day’ did I even consider track racing. While Repsych were working through the logistics of their first try the track day, I joined a cycling club and signed up for a Cycling Australia Gold Race licence so that I could ride with the Repsych Sunday afternoon training sessions. (I could also have purchased a Recreational Silver licence to participate in the training sessions, but I also want to race). Repsych’s head coach is former World and Commonwealth Games Champion Kerri Meares; coach Ky Lane has 20 years of road, track and MTB experience.

To be honest, I was like a child waiting for Christmas before the first training session with Repsych on Chandler Velodrome. I was eagerly looking forward to getting on the track, even though it was with some trepidation!

I remembered Launceston’s velodrome as being very steep and had seen other velodromes on TV. Chandler Velodrome looks steep when you first ride around the bottom of the track. When you ride up the banking, you realise how steep it truly is. Apparently Chandler Velodrome, while being a 333.33 m outdoor track, has 31 degree banking on the corners.

Before heading out onto the track, I was given a short briefing by Kerri, including where to ride — stay at the bottom of the track on the flat duck boards until I am comfortable. When ready, check to make sure there is no one approaching from behind, then ride up the track to the stayers line  (the blue line in the middle of the track).

For me, there were three fear factors at play for my first ride on Chandler Velodrome.

1) The bike. Are my pedals going to hit the banking and make me crash? Are my tyres going to slip, sending me sliding down the banking. Both of these could have disastrous consequences, particularly if I crashed taking out a group of riders travelling at 60+ km/h below me on the track. Ouch and $$$! 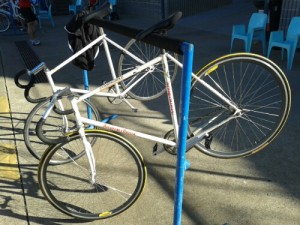 2) Experience. Let’s face it, there are kids as young as 12 who quite happily roll around Chandler Velodrome. The track bikes have the same skinny tyres as normal drop-bar road bikes and I am quite confident riding them. The big difference with track bikes is the fixed gear and no brakes. No brakes is not a big issue because no one else has them on the track either. But if you forget to keep pedaling, the fixed gear is going to give you a not-so-gentle reminder to keep your legs turning. Another new rider at the training session had moved straight from his road bike to a fixed gear track hire bike. After a couple of reminders from the fixed gear, he had no problems.

I had a big crash at 35+ km/h a couple of years back riding fixed gear on the road — bunny-hopping a man-hole cover and stopping pedaling in mid-air on a fixed gear just does not work!  Duhh!! Despite this, I decided to convert the freewheels on my singlespeed road bikes into fixed gear. After several very cautious laps of the 36 km Brisbane River Loop, I gained in confidence until coasting no longer meant, ‘stop pedaling’, but now means, ‘rolling my legs over with the pedals’.

3) Courage. With the bike and experience factors taken care of, the only thing left was my own personal courage to head up the velodrome banking. I decided a few days before my first track session that I was not going to tip-toe around, otherwise I would be circulating at the bottom of the track all afternoon. I had decided that I would do half a lap to make sure that the hired track bike rode okay, then I would head up the banking. (In retrospect, this was not such a smart thing to do because I powered up the banking without properly warming up, leading to my legs blowing out later in the session!)

So with half a lap done, I sped up and headed up the velodrome banking to the stayers line. Gulp!! As the track approached the corner, the banking got steeper and steeper. My pedals did not hit, the tyres did not slip, I held my line and I kept pushing the pedals harder. Whoosh, and I was out the other side of the corner. Phew! That was actually quite easy! Huge smile!!

A few laps later, I was invited to join in some of the drills. I played it cautious while riding with the other newbie rider on the day. Towards the end of the session, I was riding at the top of the track, using the banking to gain speed and performing sprints.

Riding fast, with no cars, trucks or pedestrians — this MAMIL is hooked! Now to get sufficient skills on the velodrome to be allowed to race. 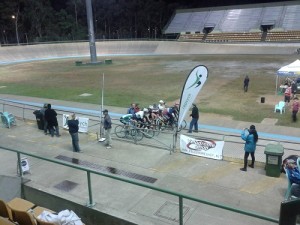