Building up a fixie/singlespeed frame is pretty simple. There are no finiky derailleurs to adjust or cables to run. You can generally just bolt on wheels, drive train, steering assembly and a saddle. When building up my Cycling Deal track/fixie frame TF, I did find three quirks that needed to be resolved. 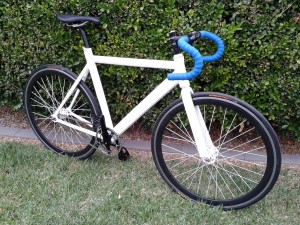 There are many reviews on the internet saying that people needed to insert a thin shim to ensure that the seat post on the Cycling Deal track/fixie frame TF could be done up tightly. The shim is often made out of a soft drink can.

On initial inspection of the frame, I can see why people think this is necessary. The seat post clamp seems to be slightly larger than the seat post.

I opted to try to do up the seat post clamp without the shim and see whether it moved. It did not, so I am riding my Cycling Deal track/fixie frame TF without a shim fitted to the seat post.

I purchased a Tektro front brake caliper. The standard mounting nut on the brake caliper does not reach far enough into the fork to mate with the bolt from the caliper. This is a very simple and quick fix. I purchased a 30 mm recessed nut from Gear Shop Brisbane for a couple of dollars, and then ground it down to about 27 mm. If you can purchase a 27 mm nut, it should be about perfect.

3. Headset installation — you have the right tools?

And now for the problem. Headset installation.

Most people who purchase a cheap frame, such as the Cycling Deal track/fixie frame TF, are not going to have a full workshop of bicycle tools required to do headset installation. Most bike shops will not work on a cheap Chinese frame purchased online. Owners are therefore going to try to do the headset installation without the correct tools, like I did.

The correct tools for headset installation are:

By the time you purchase the above, you have probably spent another $100 over and above the frame purchase price. This starts to make the frame pretty expensive. At least you can keep the tools for other bikes, but how often do you need to install a headset?

The bodgy work arounds if you do not have the correct tools are:

If you mess up the headset installation, you may also need:

The bodgy work around for the above involves an old flat blade screw driver and a mallet.

My attempt to press in the headset using a threaded rod passed through a couple of blocks of wood resulted in the headsets not being properly seated. They were an extremely tight fit. I decided to remove them to try to seat them properly. Unfortunately, without a proper headset remover, I smashed the bearings out of the headsets. I nearly threw the frame in the rubbish bin at this point. There is a lot to be said for using the correct tools.

I finally found a suitable replacement headset. If you need to replace your headset, you will need a semi-integrated headset — Cycling Deal do not sell them on their web site. I finally found one on eBay — I purchased a “Headset Internal Alloy CNC 1-1/8″ Prestine White with Cap PT1808H” from RAM Cycle Parts for $37.95! Ouch!

When the new headset arrived, I removed the paint with some fine sandpaper from the outside of the headset bearings and the inside of the fork tube where the bearings were to be seated. This allowed me to properly seat the bearings without applying undue pressure.

I also discovered that that the new headset did not have a split fork crown race, meaning that I could not push it on by hand. I tried to use the fork crown race from the original headset, but it was slightly different and the bearings bound ever so slightly meaning that I could not get precise steering input while riding the bike. I finally partially seated the fork crown race, gently tapping it down with a cold chisel and mallet. I then assembled the headset and went for a few rides hoping that it would seat properly. It did not.

I finally got an email back from Cycling Deal about a replacement headset. They sell them for $25, but they are not listed on their web site. At the time, they only had black ones in stock. I purchased one and found that the black headset does not have the thick layer of paint that the original white headset had. The black headset was therefore able to be pressed into my white frame without undue force. I finally have a fully assembled white Cycling Deal track/fixie frame TF with a black headset.

As I stated earlier, there is a lot to be said for using proper tools!!

While expensive framesets come without the headset installed, I would argue that a cheap frame like the Cycling Deal track/fixie frame TF should have the headset pre-installed. Most people who purchase this frame are not going to have a workshop full of bike tools, nor are bike shops going to be too keen to help you out. Many other cheap frames come with the headset installed, such as the Cell Bikes fixie frame. Perhaps Cycling Deal could arrange for this on the next shipment of frames?

For more information on this bike, explore here and here.