After my Fuji Absolute 3.0 flat bar road bike was totally submerged in the 2011 Brisbane floods, I decided to replace the wheels. With most of my funds going towards repairing our house, I decided to purchase a set of Easton OEM wheels (spoked 20 front and 24 rear) from Cell Bikes for $179. I fitted them with Vittoria Rubino Pro tyres and Ultralite tubes and a Shimano HG50 12-21 close ratio cassette.

Initially, I was extremely happy with the wheels. The bearings were smooth, and they rolled really well with the Vittoria tyres fitted. I can’t say that they really improved my time on my regular 30 km circuit, but I felt good riding them.

My problems with these wheels started when a riding buddy had one of those embarassing incidents that we have all had — he did not unclip his feet before coming to a stop. As he fell, his handlebars and brake lever tangled with my Easton front wheel, bending a spoke and putting the wheel out of true. This was no big deal and not the front wheel’s fault, but it meant that I also had a close look at the rear wheel while they were off the bike.

What I discovered, was that after a couple of hundred kilometres, the non-drive-side spokes of the rear wheel had become loose. In fact, one spoke had completely undone and was just loosely sitting in the spoke nipple. If you find this, before you try adjusting the wheel, see if you can claim on warranty. I played with mine first, so did not make a warranty claim.

I initially tried the acoustic tuning method of tuning the wheel to F# using my guitar chromatic tuner. It seemed to work for the front wheel, but the rear wheel did not ring well and would not register reliably on the tuner. I then purchased a Park Tool spoke tension metre. Using it, it seemed that the front wheel was reasonably evenly tensioned using the acoustic tuning method. I then brought the rear wheel drive side spokes up to even tension before dishing and aligning the wheel using the non-drive-side spokes. This is how Easton indicate that they build their wheels. 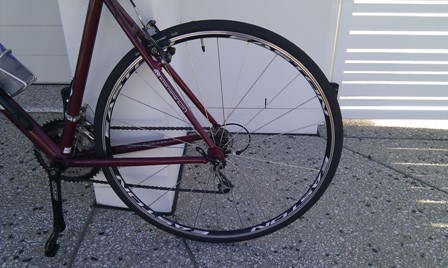 On the first ride after re-tensioning the spokes, my first spoke came loose after only about 10 km. I then stopped beside the road about every 5 km for the remainder of my 50 km ride to check and re-tension the non-drive-side spokes on the rear wheel. One time, I actually found that two spokes were only sitting loosely in their spoke nipples!

On getting back to where I was staying (we had gone away for the weekend), I removed each spoke and applied a drop of low-strength Loctite to each spoke nipple on the non-drive side and re-tensioned the spokes. The rear wheel has now run true for the last 1,000 km.

Apparently radially laced spokes can be prone to the spoke nipples loosening during use. While these are cheap wheels, Easton is a renown wheel manufacturer that makes some superb racing wheels. I am assuming this is a manufacturing glitch that is not common throughout their wheels.