We recently stayed at Adder Rock Holiday Park on Stradbroke Island — or Straddie as the locals like to call it. We pitched our BlackWolf Turbo Plus 300 tent on the foreshore facing the Pacific Ocean, and survived a wild and windy night.

The first night we spent at Adder Rock Holiday Park was fairly windy. We contemplated moving camp site, but my wife was adamant that she wanted to be right on the beach front.

The second evening on Stradbroke Island, it was too windy to cook dinner outside so we had dinner at the Stradbroke Hotel. I checked the weather forecast on my wife’s iPad only to discover that northerly winds were forecast for the next 48 hours (prior to leaving, the forecast was for westerlies from which our camp site would have been sheltered) — and there was a coastal wind warning current for the following evening.

We were committed to staying on the foreshore that evening, so when we returned from the Stradbroke Hotel, my family crawled inside our BlackWolf Turbo Plus 300 tent and went to bed while I secured the camp site as best I could. My guess is that the wind was more than 20 knots, but gusting even higher.

I staked out all the guy ropes on my BlackWolf Turbo Plus 300 tent — the first time I have ever done that. I also tied the awning down to the front of the tent — there were already some minor stretch marks in the awning grommets from gusts of wind catching it like a kite earlier in the day. I tied tarps to the fence in front of our tent to try to create a wind break, and put tables and chairs on their side to help deflect wind around the tent. Around 9pm, with sand blown in my eyes, I decided I could do no more and crawled in the front door of the tent and into bed. 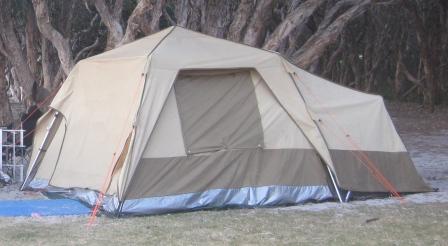 The wind was so bad that I decided whatever happened outside, I was just going to leave it. I was not going to get out of bed to check whether any of our gear was being blown away. There was a piece of canvas on the fly next to our heads which flapped noisily, and the whole tent would shake and shudder as gusts of wind hit it. Despite staking down the front of the tent, the front metre of it floated on an air bubble pushed under the floor of the tent by the wind. The wind peaked around midnight, but we withstood more than eight hours of solid buffeting by the wind.

In the morning, I crawled outside to a moderate breeze. Several items of gear that I had left on the ground were now covered with sand. The spout of my kettle had been left open facing the wind and there was now a thick layer of sand in the bottom of the kettle. My tent was filthy, but I was slightly amused that one side of the awning ropes had a black line down them where they had been facing the wind! 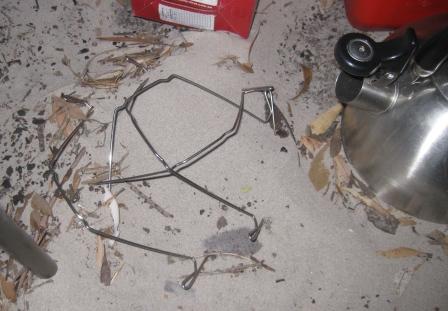 Toaster almost disappeared under the sand, while the kettle spout was left facing the wind 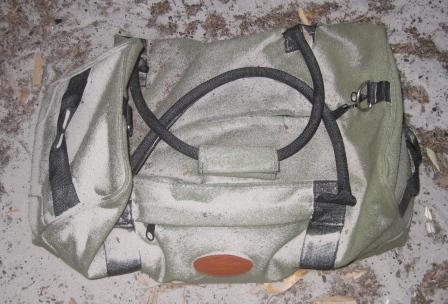 Apart from the minor stretch marks around the grommets in the awning that had occurred the day before, there does not appear to be any damage to my BlackWolf Turbo Plus 300 tent. Considering the wind and the buffeting, that is outstanding!

I have the canvas model tent, which is nearly double the weight of the BlackWolf Turbo Lite Plus 300. The heavy canvas is a real pain to lift onto my Toyota Prado roof rack and move around, but I was thankful of having the heavy duty tent that night.

BlackWolf Turbo Plus 300 after the storm with the awning up

A BlackWolf Turbo Lite (I am not sure of the size) was pitched inside the line of protective trees, while a Turbo Lite Plus 240 was pitched near our tent on the foreshore. The owner of that tent assured me that the BlackWolf tents could take a beating having camped on the foreshore on Moreton Island and been hammered by the wind. He had tied his awning back over the top of his tent, but it also survived unscathed from the wind. 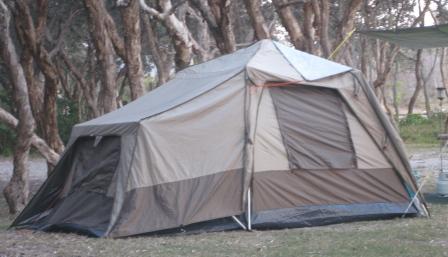 BlackWolf Turbo Lite Plus 240 with its awning tied back 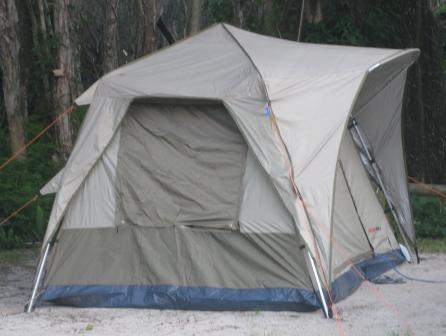 BlackWolf Turbo Lite with all ropes guyed out, despite being behind trees in the relative calm of the camp ground

With a coastal wind warning current for the third evening, we decided to move our tent further inside the camp ground where the wind was almost non-existent. The couple with the BlackWolf Turbo Lite Plus 240 followed our lead. Fortunately, with the fast pitch of the BlackWolf Turbo tents, this was not a huge task.

In retrospect, I should have checked the weather more closely before leaving. I had been focussing on forecast rain and temperature, not the predicted westerly wind which had become a northerly wind. I also should have set the tent up with the back of the tent facing the wind. Lesson learned, but fortunately the BlackWolf Turbo Plus 300 tent survived my mistake!

Tell me your story about surviving a wild night in
your BlackWolf tent in the comments box below.