If your power windows are not working properly on your Toyota Prado, try this trick. You may also need to do this after replacing your car battery. 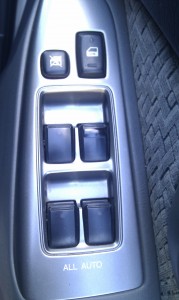 A while ago I had to change the battery in my 2005 model 120-series Toyota Prado.

As most owners would know, removing the battery and installing a new one requires re-programming the PIN into the car stereo. I have the PIN and followed the instructions in the owners’ manual to reprogram the radio PIN. Easy.

I went to the local Toyota dealer to get the driver’s door window switch checked out. In the conversation with the service guy, he casually asked whether I had recently replaced the battery.

“Ahh, that will be your problem. You need to reprogram your power windows,” he said.

“Does it explain how to do this in the owner’s manual?” I asked.

And so I went home to reprogram the power windows on my Toyota Prado.

The instructions on how to re-program the power windows on the Toyota Prado 120-series are somewhat buried in the car owner’s manual. The procedure is called normalising the power windows and can be found on page 23 of my manual under the “Jam protection function” subheading. The section makes absolutely no reference to needing to do this after replacing the Prado’s battery. The Toyota service guy seemed to indicate that it needed to be done every time you replace the car’s battery.

The procedure to normalise the power windows in the 120-series Toyota Prado is:

I did this to the three passenger windows using the switches on their respective doors. The master switch on the driver’s door now operates again.

106 thoughts on “How to reset Toyota Prado power windows”