I had the chance to get in a few hours flying today in good breezes. This allowed me to test and review a few of my kites back-to-back; something that I normally don’t get to do when I am only out for an hour down at the local park. At one stage I had five sets of lines across the park with the five kites firmly anchored down.

I happened to have in my kite bag three parafoils and two stunt kites. So here goes …

Yee hah!! This sucker has the biggest pull of all the kites tested, and was the third fastest (behind the Rascal Stunt Kite and Premier Kites Speed Foil).

Prism Stylus P3s are available retail in Australia for $199. I picked up this kite on eBay second hand for $75.

I found that in the gusty conditions, out near the edge of the wind window, the kite would sometimes be back-winded and would start to collapse. I learnt that with patience and a subtle touch I could wait for the kite to get blown slightly down wind, pop the kite back open, and keep flying.

For a while I was flying with an aftermarket control bar, but I found that it began to get to hard to hold on to with the strong pull of the kite. I therefore reverted to the padded wrist straps that came with the kite.

In these winds, the kite did not overpower me; but at times it certainly made me dance!

They say power corrupts. Well I am corrupted!! 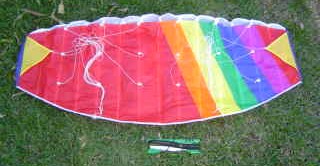 The Premier Kites Speed Foil lives up to its name. It is fast. Very fast. It was easily the fastest kite on test.

The foil is only small, so does not have much pull, although more than the eBay speed foil which is larger. The Premier Speed Foil probably has slightly more pull than the Rascal stunt kite.

I found that in the gusty conditions, out near the edge of the wind window, the kite would sometimes be back-winded and get balled up and fall to the ground. I generally could not recover mid-air like I could on the P3.

Whereas with the P3 I could be fairly clumsy with my control movements, this kite required some finesse to keep it from crashing. When it did crash, it generally could not be re-launched from the crash position and had to be re-set on the ground.

Overall great fun and it packs up into a small bum bag too, all for $90. 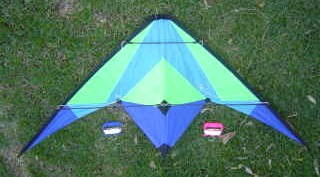 The High as a Kite Rascal Stunt Kite was the second fastest kite on test and had impressive pull for a stunter, probably just behind the Premier Speed Foil. This is a very nimble kite. In fact, the first couple of times I flew it, I had difficulty keeping it in the air. I must be a better kite flier these days, because I have no trouble controlling it now.

Both stunt kites were quite noisy, with the sail fluttering at speed.

I bought this kite for $55, although I have seen them advertised for $45 recently. The advertising for this kite says that they are the best selling stunt kite in Australia. For the price, I reckon they might be right.

I had heard that putting shorter or longer lines on kites affected the perceived speed of them. Having five sets of lines already laid out on the paddock, I swapped the short lines for a set of longer ones from my bargain shop stunter. It made a slight difference to the perception of speed, but I feel that the intrinsic speed of the kite has more impact that the length of the kite’s lines. 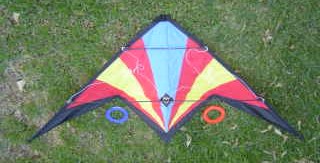 I picked up this kite for $15 from a bargain shop. It is unbranded. The sail is made of rip-stop nylon, but unfortunately the lines are not the same length. This kite is excellent value for money.

Like the Rascal, the sail flutters loudly at speed.

The kite is not particularly fast, nor does it have much pull, but it makes a great learner kite.

Buy three of these kites: one to fly, the other two for spare parts when you break the first one learning to fly!

I picked this KiteOL Speed Foil up for one cent (plus $19 postage) on eBay. I actually got out bid a couple of times (six cents and 11 cents!) on identical kites before picking up this kite for one cent!

Given my previous experiences with cheap kites, it had the potential to be a good flier. I was wrong.

The first big disappointment on this two metre kite was that it was not made out of rip-stop nylon. The eBay seller said that it was. However, apart from that, the kite specifications were as advertised.

But how does it fly? Well, it does fly, but it is neither a power foil nor a speed foil. The foil obviously was not very efficient as it would not easily reach the high angles overhead or at the edge of the wind window like the other kites on test.

I considered swapping over the lines to a shorter set to see if it would give me more speed, but given my experience with the Rascal, did not think that it would change much.

Like the bargain shop stunt kite, the lines on this kite were not equal length. While the spools on the bargain shop kite had a tie off point, the spools on this kite did not. While I tied the lines on to the spool, under tension the line that had to be shortened by wrapping around the spool would rapidly unwind, meaning that I had two significantly different length lines and an unflyable kite.