My Premier Kites Speed Foil has got me hooked on parafoils. It is only small, but is fast and pulls.

The other week I spotted a Prism Stylus P3 on eBay. I won the bidding at $90 including postage. Usually P3s are $195 in Australia, so I figured I got a pretty good deal. 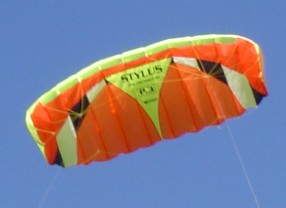 The kite is in excellent condition, but there were a couple of odd things which I have corrected.

Firstly, one of the pigtails on the back of the kite used to stack kites was facing forwards into the wind. I took it off and re-tied it so that the wind would blow it backwards, the same as the other one.

Both of these were no big deal. I suspect they came from the factory like that and the previous owner never bothered to fix them up.

I took the Prism P3 out for the first time today. My wind gauge at the end of the session said that the wind was gusting to nine miles per hour. Hardly a windy day. Apart from the periods of almost dead calm, the Prism P3 stayed aloft. And in the gusts, the P3 showed its potential to pull. The kite is rated at 6mph to 25mph, so I was definitely flying at the lower end of the wind scale.

I can’t wait to take the Prism P3 kite out in stronger winds. Yee hah!