I recently purchased a folding slingshot (or sling shot, however you want to spell it) from Wholesale items from China on eBay.

Yes, I know. The only difference between men and boys is the price of their toys. When I was young we made shanghais. They were made out of a fork of a tree with a piece of shock cord and a vinyl pouch. While looking for something else on eBay one day I found the slingshots and happened to purchase one!

A quick note on quality of the slingshot. It seems strong enough, but the finish on the metal fork and brace is a bit rough. But then again, you don’t want your slingshot to look too nambie-pambie do you?

Apparently there are some Australian states that won’t allow importation of these slingshots. They are sent directly from Hong Kong. The seller posts the slingshot unassembled — that includes the handle not screwed together or band attached — and in two separate boxes a week apart. The seller guarantees delivery, but make sure you purchase using the ‘Australia-only’ slingshot listing.

My understanding though, at least in Queensland, is that slingshots are legally allowed to be sold as long as the rubber sling is not attached to the fork. So I do not believe that I am doing anything illegal, as long as I do not use it as a weapon …

However, it leaves the question of how to attach the surgical tubing used as the sling to the posts on the fork. If you try to just slide the tubing on the posts, it only goes on about 5 mm … and the first time you give it a decent pull, the tubing comes off.

A quick search of the internet reveals that dipping the ends in rubbing alcohol (that does not contain any lotions or glycerin) before sliding the band on the posts is the secret. Leave it to dry for 24 hours before pulling back on the slingshot and the tubing should not come off.

The only readily available brand of rubbing alcohol I could find in Australia was Isocol. The Isocol packaging does not alert you to any additives that may make the band slip off. You still need to give the end of the tubing a good twist to get them on the posts and then need to align them so that the pouch hangs evenly. 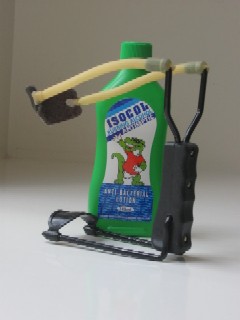 Now for a little target practice …