Duck Creek Road is a great track to try if you are new to four wheel driving, or only have a soft roader or SUV. With the drought-breaking rain in recent years, Duck Creek Road has become sufficiently rough to warrant carefully thinking about where you plant your wheels, but not so challenging that you are likely to get stuck or seriously damage your vehicle.

I recently took the family on a four wheel drive day trip up Duck Creek Road to O’Reilly’s. After reading many reviews on the internet – from, “the road is very rough”, through to, “it is a doddle, a two wheel drive could do it” – I was a little unsure what to expect. I suspect that the high rainfall in recent years has deteriorated the track, which is not a bad thing when you are going four wheel driving!

The bitumen ends and there is a short length of dirt road — probably less than 1 km — before reaching the gate at the start of Duck Creek Road proper. 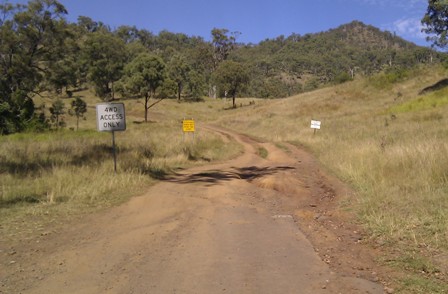 Where the bitumen ends and the dirt road begins

On arriving at the gate to Duck Creek Road, I decided to deflate my tyres to around 24 psi. I did this, not so much because I thought I needed to, but more for passenger comfort and to play with my 4WD toys – a Bushranger tyre deflator and TJM air compressor. 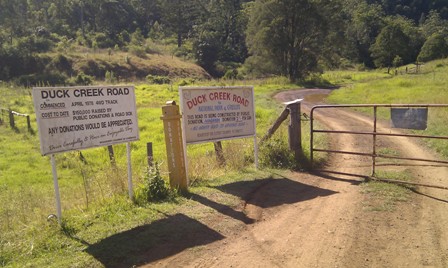 The gate at the start of Duck Creek Road 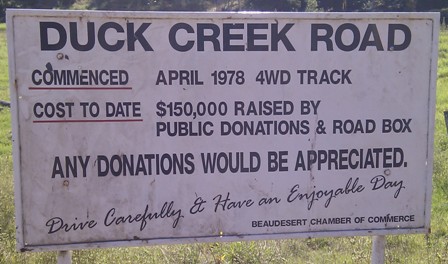 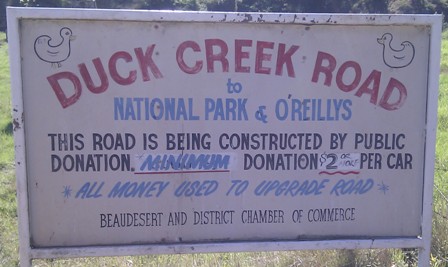 After donating our $2, we set off up Duck Creek Road. By four wheel driving standards, this road was relatively easy. I saw a Suzuki Vitara heading up the track while we were stopped at the gate. We did not see them again until the picnic lookout, so they were doing okay. The other vehicles on the road were mostly Nissan Patrols, Toyota Landcruisers and various brands of 4WD utes.

There are many signs along the road naming various locations, most likely acknowledging the contributions of many people over the years. There are also several signs advising people to stick to the track — the road runs through privately held land. 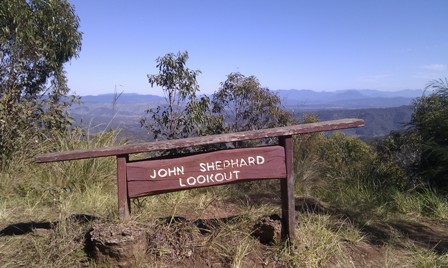 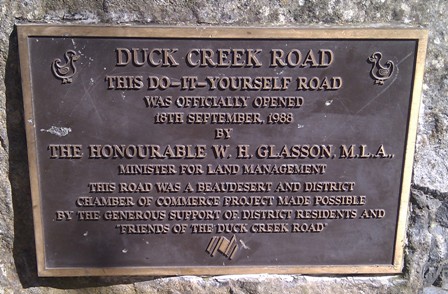 Plaque at the John Shephard Lookout

I was very pleased at how easily my Toyota Prado went up the hill. Apart from some Cooper Tires ATRs in the standard rubber size, the Prado is totally standard. I needed to be thoughtful choosing lines through washouts several times, but throughout there was no hint of wheel spin. I was quite surprised that I did not drag the under body or tow bar over a few of the creek crossings, washouts or berms directing water runoff off the road. As usual, the photos do not do justice to the size of some of the washouts. 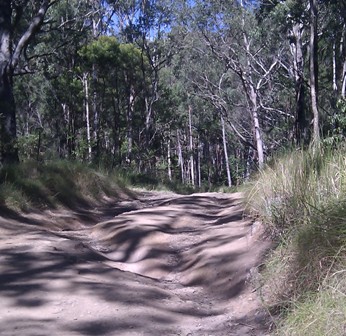 Near the top of Duck Creek Road, before you get to O’Reilly’s, the road enters a rainforest. Despite not having rained for several days, the road was still mushy. My Cooper Tires ATRs did not slip at all, but that is not to say that a road oriented tyre running high road pressures would not have done a little slipping and sliding through this section. 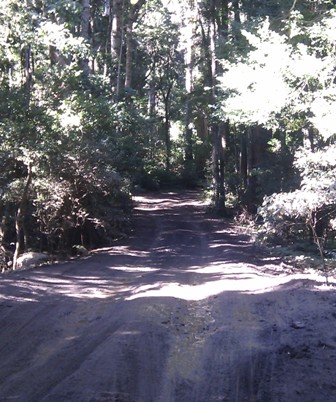 Road was mushy through the rainforest section

We rolled up the hill at about 30 or 40 km/h, taking it very easy. Even so, we were only overtaken by one vehicle – a Toyota FJ Cruiser. The occupants were no doubt being bounced around, but they were not going crazy fast.

Overall this was a very enjoyable drive. If you are not particularly experienced four wheel driving, this is a good track to get you started. And if you are in a soft roader, again it is a good choice. As always, make sure that you take along a good dose of common sense too.

Note that the signs state that the road is impassable in the wet, and I believe that they lock the gate. However, there does not appear to be anywhere on the internet that advises whether the track is open or closed. Perhaps the Beaudesert Chamber of Commerce could put an advisory notice on their web site?

On arriving at O’Reilly’s, we were disappointed at the small car park and small picnic area — this is a very popular spot on a busy weekend. If I were to do the trip again, I would pack a BBQ picnic to have along Duck Creek Road to avoid the chaos at O’Reilly’s.