Stradbroke Island is an iconic destination that permits beach driving. When we stayed at Straddie we drove on Flinders Beach and Main Beach, as well as driving the sandy Tripod Track.

You will need a beach access permit from Redland City Council to drive on the beaches. The beach access permit is valid for 12 months and can be purchased from the Big Red Cat, Stradbroke Ferries, any of the Straddie Holiday Parks, the Amity General Store, Dunwich Sports & Hobbies, Dunwich News, Point Lookout Newsagency and Redlands on Moreton Bay Visitor Information Centre. A permit is not required to drive the Tripod Track.

As with all beach four wheel driving, take a basic recovery kit, including:

You will also probably want to carry extra water and a first aid kit, just in case.

A tide chart is a good idea too because the beach is closed one hour either side of high tide to prevent people from driving on the sand dunes.

Before you head off road, take the time to lower the air pressure in your tyres. I ran my Toyota Prado tyres at 24 psi (down from 36 psi), but many people were running at around 18 psi. I did not have any problems.

The beach access points were well signposted and are at:

There were a couple of small creeks crossing Flinders Beach. While they were only a couple of inches deep, in some places they had washed a channel with sides about 30 cm high. If you hit these at speed, it’s not going to be pretty. We easily drove around them though.

Camping is permitted in some designated camp sites along Flinders Beach. 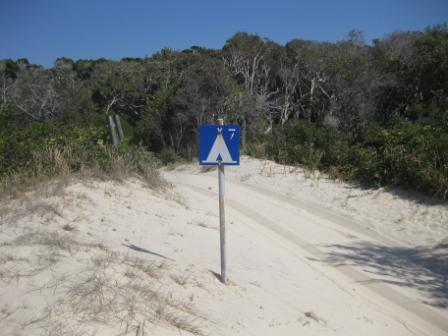 Main Beach is an easy drive once you get on the beach, but the beach entry points were more difficult than those of Flinders Beach. The beach access points are well signposted and are at:

Main Beach is beautiful and much longer than Flinders Beach. We drove a couple of kilometres past the causeway access point before turning around. There were three large groups of people beach fishing — 10 to 20 cars in each group.

The access point at the causeway was powdery and it was obvious that no vehicles had been up there for some time. A Park Ranger took two goes to get up the access point, so we did not give it a go. 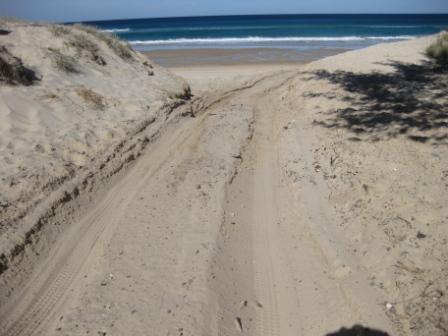 The churned up Main Beach access point at Point Lookout 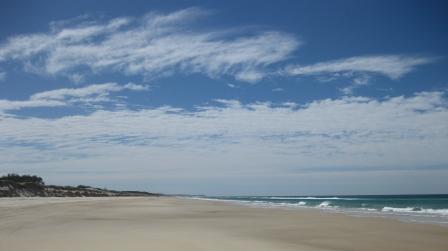 Tripod Track, while not a beach, is a sandy four wheel drive track between the Trans Island Road and the East Coast Road intersection to Amity Point. The access points are not signposted.

The northern access point is on the East Coast Road and is about 200 metres west of the intersection between the East Coast Road and Beehive Road. The southern access point is on the Trans Island Road between the Blue Lake National Park entrance and the causeway. We found it by guessing that the large number of tyre tracks off the road led to the Tripod Track. The main entrance is up a sandy hill, which the Prado easily navigated.

The Tripod Track is mostly single lane, with several blind corners. Take it easy and you will not have a problem. The sand  and wheel tracks were not deep through most of the track. Again, this is a pretty easy track to start your four wheel driving. 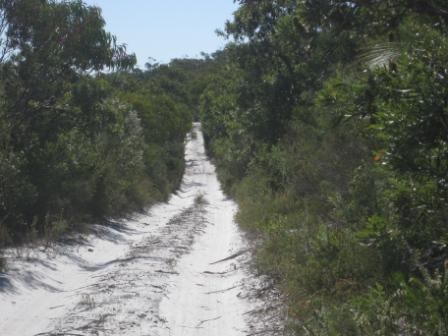 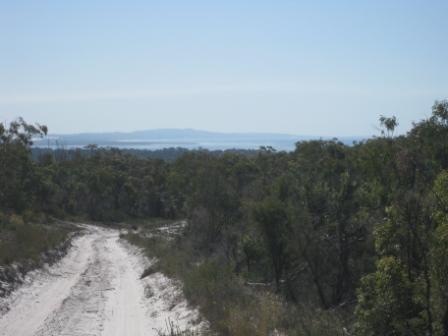