We recently camped at Adder Rock Holiday Park on Stradbroke Island — or Straddie as the locals call it. While we were on Straddie, we took the opportunity to visit two other Straddie Holiday Parks, Cylinder Beach Holiday Park and Amity Point Holiday Park.

We were camping in winter, so mosquitoes were not a problem. But being a sand island, mossies can be a problem on Straddie. My eight year old daughter also picked up a tick somewhere around our camp site. Ticks are quite common in the Australian bush, so are something to be aware of, but not alarmed about. My wife delicately removed the tick with no ill effects to my daughter.

We initially set up our BlackWolf Turbo Plus 300 tent in the Sea Eagle Hideaway camping area behind the beach. We were absolutely hammered by a northerly wind straight off the Coral Sea. I understand that northerly winds are not the prevailing weather on Stradbroke Island. However, that did not help us. With a coastal wind warning current on the third evening, we shifted our camp site to the Goanna Rest area behind a line of protective trees and practically no wind! It is amazing how much difference 20 metres can make. Goanna Rest had an incline though. Even though we chose the flattest part, my five year old daughter still rolled down the hill in her sleep.

I was not a big fan of the change area being outside the shower cubicles. I would like to see more hanging hooks in the shower and toilet cubicles. Campers value being able to hang their clothes and towel up, so at least three hooks in each cubicle are needed, not just one hook.

The camp kitchen had electric barbecues, but no running hot water for the sink. A kettle was supplied should you require hot water.

The holiday park has swings and a small children’s playground.

The beach opposite Adder Rock Holiday Park was wide and flat. There is no surf patrol on the beach. Adder Rock itself is fun for the kids to clamber over.

There is a four wheel drive access point to Flinders Beach next to the camping ground, as well as a service station just around the corner — great for ice and pumping up your tyres after a day of driving on the beach.

Adder Rock Holiday Park is dissected by a swamp. Perhaps I should have looked at the park map more closely, because I did not notice this when booking our camping site. I do not know why they don’t refer to it as something more pleasant — perhaps ‘wetlands’ is a more tourist friendly term? 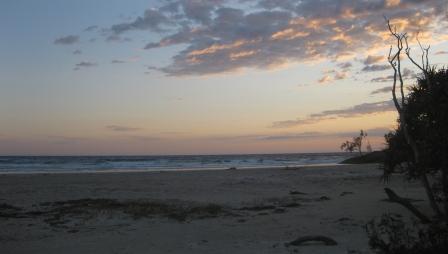 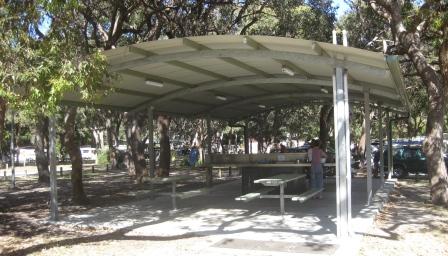 We had planned to stay at Cylinder Beach Holiday Park, but the 6 m x 6 m marked camp sites at Cylinder Beach were too small for our BlackWolf Turbo Plus 300 tent. Apparently park management monitors closely any encroachment over the camp site borders.

When we tried to book the site, they were not keen to book two sites for us, but having inspected the camping ground, this would have been okay. Most of the sites seemed to be on an incline at Cylinder Beach Holiday Park.

Cylinder Beach was also affected by the unseasonal northerly winds.

Again, the amenities were kept clean and well maintained. There is a kids playground and Cylinder Beach had a daily surf patrol. 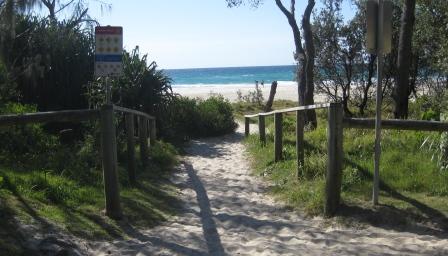 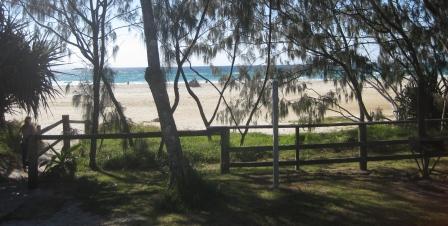 Powered van sites on the left 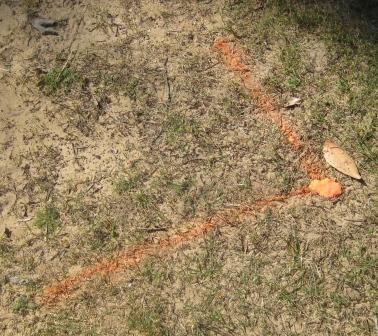 Amity Point Holiday Park is a wide, open, flat camping area with a number of large, shady trees. The holiday park was relatively empty when we visited.

This is fishing-central with a boat ramp next to the park entrance.

I have heard that Amity Point Holiday Park often suffers from sand flies or mosquitoes, but we did not notice any while we were there.

Some years ago a teenage girl swimming near the jetty was attached by a shark and subsequently died. There are plenty of warning signs and and enclosed swimming area near the jetty. 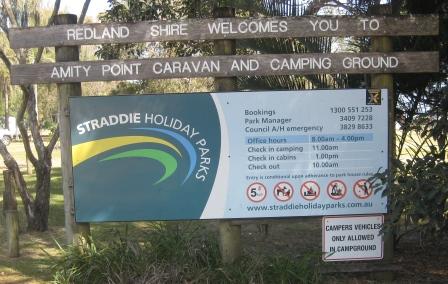 Swimming enclosure at the jetty near the Amity Point Holiday Park

Tell me your story about camping on Stradbroke Island in the comments box below.