We have just come home from a magnificent weekend camping at the Noosa River Caravan Park. This is a top spot to camp for a few days or a week. 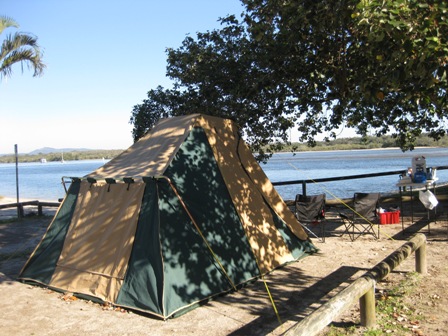 We were lucky enough to get one of the waterfront camp sites. It was pretty special waking up only about 10 metres from the water and hearing it lapping the shore in the morning.

I thought it was a little ironic the people with $200,000+ caravans were relegated to the back blocks of the camping ground, while those in $200 tents got to camp on the foreshore! Nice. I guess the tents have less of an environmental footprint than caravans. 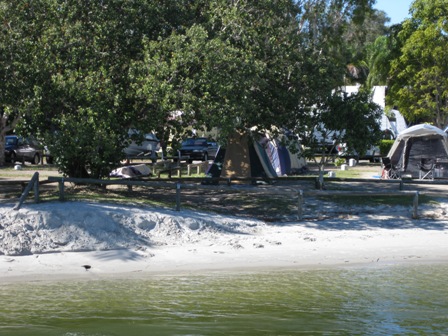 Tent tucked under the trees by the Noosa River

We arrived on Friday evening, after dropping the children at their grandparent’s place on the way up from Brisbane. The convenience store and reception was advertised as closing at 6pm, but they had already shut for the day when we arrived at 5:50pm. No big deal. Our booking was clearly marked on a whiteboard. Unfortunately though, that meant we did not have an access code for the ammenities blocks until the following morning. There was one ‘public’ cubicle that was left unlocked that we used before bed. If you are planning to arrive late, phone ahead and get the access code to the amenities blocks!

The amenities blocks were kept clean, although some shower cubicles could have done with a fresh coat of paint. They were certainly heavily used during peak periods!

The camp site areas were clearly designated. However, if you have a megamart Taj Mahal dome tent, you probably should check the size of the site you have booked. Our site was one of the large ones at 4.5 metres x 5.5 metres. The sites were probably large enough for most six-person tents, but larger tents may not fit. We had planned to put up a big tarp over our tent so had booked the big site – but in the end got lazy and decided the tree we were under was sufficient.

The Black Wolf Turbo Lite Twin 300 beside us did not fit in their camp site. At 3 metres x 6.6 metres, they encroached on their next door neighbour’s site. Fortunately they seemed to know each other so it was not a problem. The Black Wolf Turbo Lite Twin 300 has to be pretty close to camping porn. The Black Wolf owners were only a couple and one four-year old — why did they need such a big tent? People were commenting about how great the tent was, but then taking the mickey out of the tent owners by asking if there was a bar in the tent! But I digress … 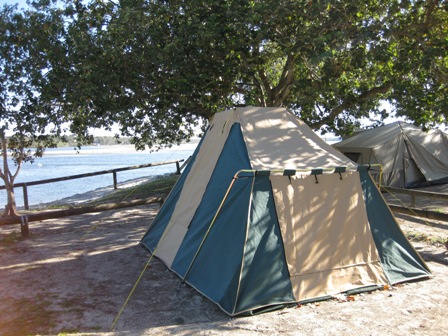 The water was cold being the middle of winter, so no children were swimming. I would expect that the foreshore would be overrun by children swimming in summer.

Our tent site was near the boat ramp. I think that the boat ramp was only for use by the caravan park visitors. The boaties started launching their the boats pretty early, but kept noise to a minimum.

People were fishing along the foreshore nearly all day. Adjacent the boat ramp was a fish cleaning bench. Pelicans would gather around hoping to be thrown a morsel of fish. Occasionally one came their way, and then the pelicans would squabble over it. Quite entertaining. A local told us that pelicans had only just begun return to the area after the breeding season at Lake Eyre. 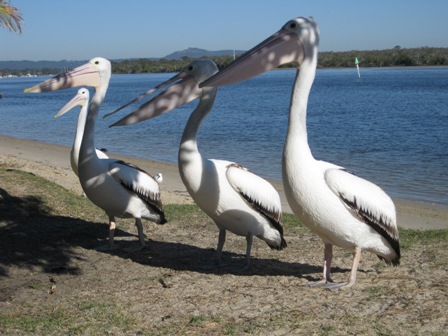 Pelicans hoping for a morsel of fish

The Noosa Ferry is a 10 minute walk towards Noosaville. During non-peak holiday periods, the ferry leaves about every 90 minutes from the T-boat hire pontoon, which is about two blocks away from the caravan park. You will have to flag down the ferry. The ferry takes you in to Noosa Heads Hastings Street behind the Sheraton Hotel, or up river as far as the Tewantin Noosa Marina. 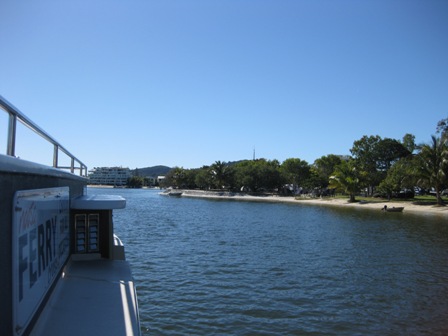 If you miss the ferry, Hastings Street is about a 25 minute walk away. The caravan park is also an easy walk up river to the Noosaville foreshore restaurants. We had several delicious meals up there.

We also enjoyed a long walk through the Noosa National Park. We walked as far as Hell’s Gates. I think the return walk from Hastings Street was about 10 kilometres. This is beautiful and easy walk, and very popular. Noosa National Park is also home to Alexandria Bay, a nudist beach. 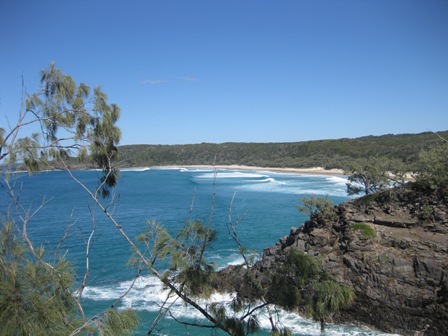 Noosa National Park; Hell's Gates in the foreground and Alexandria Bay in the background

We are already planning our next trip to the Noosa River Caravan Park — this time with children and another family as well. I imagine the caravan park will get very busy in summer and school holidays, so book early!