Rocksmith offers the allure of using a computer gaming environment to learn and play guitar. A new generation of computer geeks and middle aged men are going to be able to play guitar, perhaps even as well as the cool kids. As a result, this computer game has the potential to change the world. 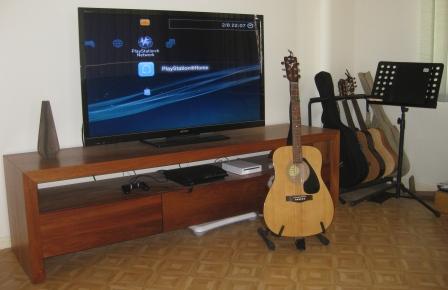 The Rocksmith web site promises, “… the next stage in the evolution of the guitar game. Rocksmith, the first and only game where you can plug any real guitar into your PC/MAC, Xbox 360 or PlayStation3 system, and actually learn while you play.” Rocksmith was released in October 2011 in the USA and Canada, and was released in Australia and the UK in late September 2012.

Rocksmith is the first computer game that allows you to plug in a real musical instrument, in this case a guitar or bass guitar. The guitar must have some form of electronic pick-up, so even acoustic guitars with an electronic pick-up can be used with the game. The game takes the genre of rhythm music games beyond the likes of Rock Band or Guitar Hero by using a real guitar as the controller interface.

According to the Rocksmith web site, “Rocksmith was designed to be a game first, but like any good game you end up passively learning.” Some internet reviews have stated that this is not a game that you bring out with a few mates over Saturday night beers; it is a game that you sit down by yourself and methodically work through.

In my opinion, they are missing the point trying to compare Rocksmith with other cult computer games. Yes, Rocksmith is a game, but more importantly, it is a fun learning tool. Either way, the inference is that you will end up learning to play guitar from playing Rocksmith. The game is likely to generate a cult following, not because of the game play, but because of the skill that you learn.

I am sure that there are many people like me who want to learn to play guitar, but just do not have the patience to do the hard yards practising before it all pays off. As with all musical instruments, there is a lot of hard work before you can really enjoy playing your instrument. 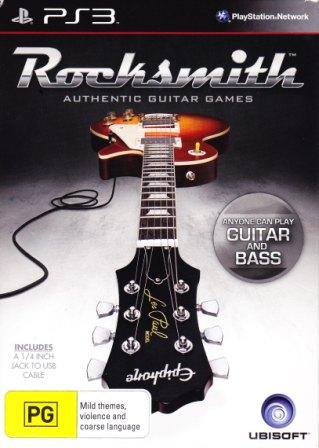 How Rocksmith will change the world

This is a big statement — Rocksmith will change the world.

From a pure gamers’ perspective, perhaps Rocksmith is not cutting edge or particularly innovative. Once again, that is missing the point of Rocksmith. The game provides a fun and entertaining environment in which to learn and play guitar.

Who hasn’t been inspired by a rock god to become a guitar player? Few people though actually take the step of purchasing a guitar and trying to learn to play. The minority of people put in the long hours of practice necessary to actually go on to become rock gods themselves.

Many people though set out on the rock god journey, learn some basic skills on guitar and have an enjoyable time doing it. They can show off to their mates by playing some riffs and a few songs. Many will also be able to spend enjoyable hours jamming with their friends.

In my opinion, that is Rocksmith’s market. If this game does nothing more than encouraging a generation of computer gamers and aspiring musicians to learn and enjoy playing guitar, it will change the world.

How many men in the 40s, going through a mid-life crisis wanted to play guitar as a kid. For most, guitar just took too much time to practice to become really proficient.

Suffering an identity crisis and with plenty of money to spend, the Rocksmith gaming environment is sure to lure many men into the purchase of a sweet guitar and the gaming software.

A whole new generation of computer gamers are going to have their brains develop differently.

Studies have indicated that computer games may slow the development of children’s brains, particularly those areas which play a crucial role in controlling behaviour and in developing memory, emotion and learning.

On the other hand, learning a musical instrument can enhance learning, improve primary mental skills such as verbal, perceptual, numeric, and spatial skills, and help people retain and recall information.

As a result, we may have a whole new generation of computer gamers who really do think and behave differently.

With more people understanding the mechanics of playing guitar, the expectations of great guitarists will rise. Will the performances of great guitar gods rise to meet the challenge?

Rocksmith will teach playing technique, but will gamers take the next step of establishing an emotional connection with their music? With the many hours game addicts are likely to spend practising guitar, it is likely some of them will become incredibly good guitar players. From a purely technical perspective, we may have a new generation of guitar shredding virtuosos, but will they have the heart and soul present in a great rock band?

Are all these gamers who have learned to shred on guitar going to become professional musicians? Not likely.

More likely, there will be an increase in casual guitar playing for pure fun. Music enjoyment may involve strumming a guitar after a few red wines on a Saturday evening, or doing a hard core jam session with your mates over a few rum and cokes.

Whatever it is, there will be more people playing guitar just for fun. That can only be good.

Some way down the track, will playing guitar actually become uncool?

In much the same way as Lisa Simpson made playing the saxophone uncool, will a generation of computer gamers and middle-aged men make playing guitar uncool? Let’s face it, there will be a groundswell of geeks able to shred on guitar, perhaps even better than many aspiring and totally cool band members. Perhaps there will be a specific genre of music that gamers will focus on, and only that genre will become uncool?

Saxophones have been sidelined in popular culture. Are guitars going to head the same way?

Looking into the future

I have no inside insight into how Ubisoft is planning to expand their Rocksmith game. However, it would seem logical that, as gamers become super guitar shredders, they will demand more. They have experienced the fun of playing a musical instrument and want to go to the next level. Perhaps Rocksmith may throw in a little guitar theory — the game already includes scales, so it is not a huge leap. Perhaps Rocksmith may even give the option of standard music notation instead of the tab/guitar highway format.

Will Rocksmith be rolled out to other instruments? Perhaps keyboard for a start, and electronic drums also. Drums, guitar and keyboard? We now have a rocking band!! So who is going to sing?

What ever Rocksmith holds for the future of the world, in my future I have a copy of Rocksmith on order and heading my way. If I really peer into the future, I may be lucky and see my acoustic guitars moving over to make way for an electric guitar.

Posts from this web site may be reproduced in full or in part without permission, provided a link is provided back to this web site (http://www.blokespost.com or the URL of the specific page) referencing it as the original source document.